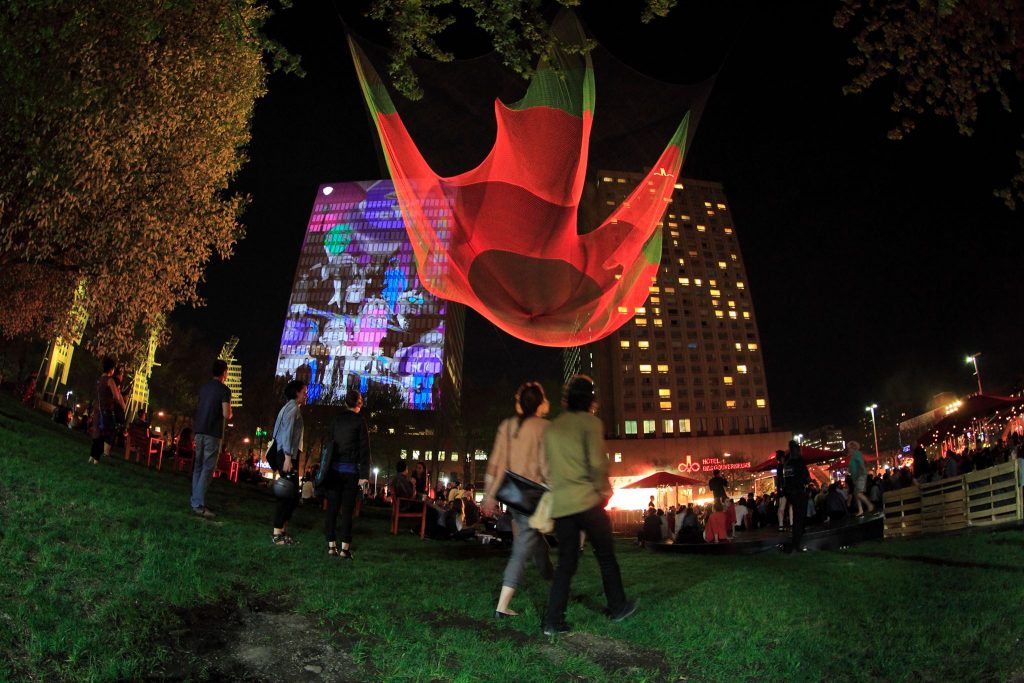 The Art public Montréal team offers eight Montréal destinations sure to please public art lovers. Visit them any time during the warm months of the year. 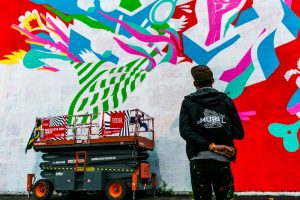 Don’t miss it! The MURAL international public art festival 4th edition will be held until June 19,  in and around the St-Laurent Boulevard in Montreal.

The 2016 edition of the MURAL Festival is bringing together exciting world-renowned artists from 8 countries, including: D*Face (UK), Buff Monster (USA), Meggs (Australia), Natalia Rak (Poland), Pantone (Spain). The festival is also very excited to welcome many major Canadian artists, including: Fonki, Jonathan Bergeron, Zek, HSiX of A’Shop, X-Ray, Five-Eight, Jason Botkin, Roadsworth and Miss Terri. There are very exciting new additions to the 2016 Festival. Among others, MURAL is bounding from the walls with the creation of several temporary and semi-permanent original sculptural art installations.

Discover Boulevard Saint-Laurent’s open-air art gallery during guided tours organized by the festival, or alone with the tour map. 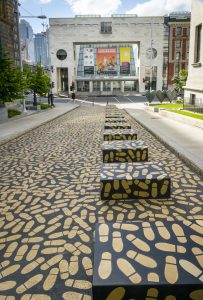 With its garden featuring twenty-two sculptures, the Museum Garden tells the story from the modern era to the present day, with works by Valérie Blass, David Altmejd, Dale Chihuly, Aaron Curry, Jim Dine, Kosso Eloul, Antony Gormley, Henry Moore, Jean-Paul Riopelle, and other Canadian and international artists. In the Garden, on Avenue du Musée, is a new installation, titled “Plancher de danse – Dance Floor” by Jean Verville architect. Thousands of golden footsteps spill down the road in a mosaic-like floor, a tip of the hat to the many mosaics in the Pompeii exhibition. An activity program associated with the installation will be announced soon!

The Museum offers guided tours of the Sculpture Garden (in French), on Tuesdays at 2:30 p.m., Fridays at 2:45 p.m. and Sundays at 2:30 p.m. For Museum VIPs, the Noontime tours on Fridays are the best choice! Consult the Museum’s activity calendar for more information. 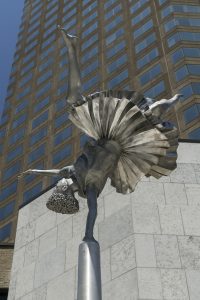 Due to its many festivals, performance spaces, and its sculptural, lighting and interactive installations, the cultural heart of the Montréal region is a favourite destination, offering urban diversion all year round.

Temporary art has taken over the neighbourhood this summer, including 1.26 suspended above the Jardins Gamelin, the 21 Balançoires on the Promenade des artistes, and videos projected once night falls. From the Quartier Latin to Place-des-Arts, 40 public art pieces are on permanent display and 20 murals adorn the area. The next time you visit, be sure to look for the new work Où boivent les loups on Jeanne-Mance Street, and then look up to see La Voie Lactée perched above the roof of MAC.

Free guided tours are offered by the Quartier des spectacles to discover its iconic cultural spaces. Interested in a tour focusing on public art? Consult the tour, on-line.

Eleven years of redefining the gay Village on St. Catherine St. E. into a pedestrian mall, Aires Libres has already set sail and will cruise through September 26. The Société de développement commercial (SDC) du Village has retained for the 3rd consecutive year the services of exhibit commissioner Aseman Sabet, who has successfully mobilized a group of artists whose works will enrich the pedestrian mall this summer. In addition to the 52 terraces beautifully set up this summer (including those on Amherst St.), one can enjoy sculptures and new art works by seven appointed artists. As for the artistic installation panels located on the lot facing Cabaret Mado (corner of Wolfe St.), it now adorns a striking new aquatic theme.

Since May 18, the narrow streets in Old Montreal are transformed by Cité Mémoire, which invites you to meet a host of characters who’ve witnessed the city’s evolution first-hand. Every evening at dusk, 19 tableaux appears on the walls that surround us, the ground on which we walk and even the trees. The free mobile app Montréal en Histoires gives access to Cité Mémoire soundtracks and historical contexts in four languages: French, English, Spanish and Mandarin.

The mobile app also offers many points of interest and augmented reality on the same circuit as the Cité Mémoire tableaux. They include 19th-century monuments, indicating the importance of commemorative statues in historic squares, such as the Monument à Paul de Chomedey, Sieur de Maisonneuve, in the centre of Place d’Armes, and the Monument à Nelson, the oldest piece in the municipal public art collection. You will also see contemporary creations. Consult the tour titled Time travel to discover some of our favourites. 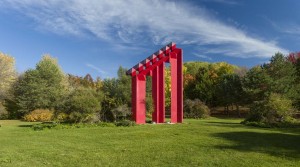 Go for a look at the sculptures found all over Île Sainte-Hélène and Île Notre-Dame, in the heart of the St. Lawrence River. They testify to the artistic vitality of the 1967 Universal Exposition (Expo 67). Today they are cultural and historical landmarks in the park landscape. The tour also offers creations integrated into the natural and built environment that remind us of different events in Montréal history. 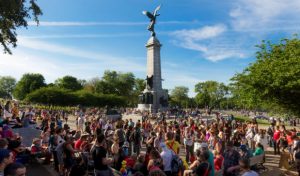 Mount Royal is a must-see for nature lovers and culture lovers! Whether you go for a nature walk, attend a free concert at the Chalet, or rock to the drumming of the Tam-tams on Sundays, you can also enjoy artwork. Near the summit can be found almost 20 pieces, some of which have been on display since the First International Sculpture Symposium in North America, held in 1964. For more information, consult the itinerary provided at artpublicmontreal.ca. 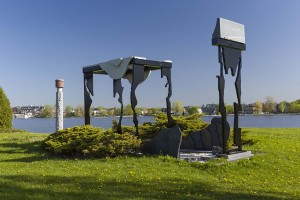 On the banks of the St. Lawrence River, 10 km from downtown Montréal, a garden of 50 works merge into the landscape. Take the tour on foot or bicycle, choose one of the three sectors: Lachine Museum grounds, René-Lévesque Park and Lachine waterfront parks. You can take a free tour offered by a Museum guide, or follow the route Rapides de Lachine and 30 years of public art in Lachine on our website, or join the Sculpt’tour with artist André Fournelle, which will be offered on Saturday, July 16.

The MURAL international public art festival 4th edition will be held from June 9 to 19,  in and around the St-Laurent Boulevard in Montreal. The 2016 edition of the MURAL Festival is bringing together exciting world-renowned artists from 8 countries, including: D*Face (UK), Buff Monster (USA), Meggs (Australia), Natalia Rak (Poland), Pantone (Spain), Evoca1 (USA), […]