Art in the métro: Stained glass of the McGill station
November 1st 2016

Getting off the train at the McGill station provides commuters with a view of five magnificent stained glass pieces about the history of Montréal. Created by Nicolas Sollogoub, La vie à Montréal au XIXe siècle seems to have always been a presence in the station. In reality, it only appeared in 1974, eight years after the métro opened. It was absent from the station for three and a half years, from December 2012, until June 2016. 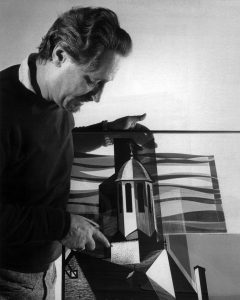 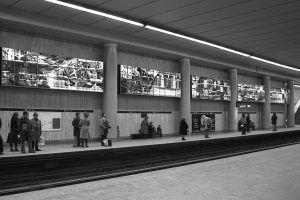 After 40 years of service, McGill station, the second busiest in the network, needed a full rejuvenation. The situation was similar for Nicolas Sollogoub’s stained glass pieces, which had lost their original brilliance. In addition, the lighting system was often non-functional. The STM decided to take advantage of station renovations to restore the artwork, with financial support from the Québec government.

Restoration of Sollogoub’s artwork was entrusted to the Centre de conservation du Québec (CCQ), a governmental agency for which the restoration of public art holds no secrets. The STM first approached the CCQ in 2004 for a complete evaluation of all public art in the Montréal métro. Once this work was done, the CCQ began to restore some of the pieces, including the splendid stained glass by Frédéric Back at the Place-des-Art station.

Despite all this, the McGill station artwork represented quite a challenge for the CCQ due to its scale: there are more than 1200 stacked glass pieces to clean. It took eight years for Nicolas Sollogoub to complete this work; how much time would CCQ artisans need for its restoration?

The art was removed at night, it was a complex task that could not be done while the Metro was operating. One by one, the 150 sections that form the five stained glass pieces were meticulously removed and packed by CCQ employees. They were placed in large wood cases, then trucked to Québec, to the CCQ workshops. 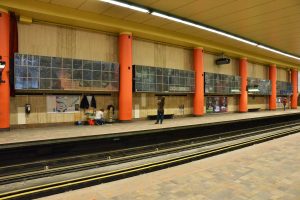 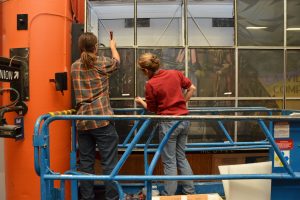 So this vibrant homage to Montréal regained its youthful appearance in the old city of Québec. One by one, the glass tiles were cleaned with care. Some of them needed to be retouched or repaired, but, overall, the art had resisted the travails of time. It was the sheer quantity of tiles to be cleaned that made the job difficult. 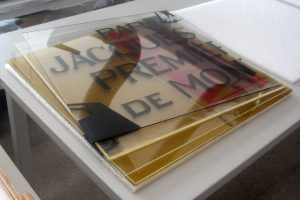 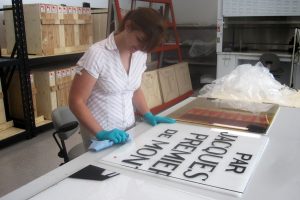 In the meantime, in Montréal, STM architects and engineers completely modified the lighting system for the Sollogoub piece. A sign of the times, the neon lights were replaced by light-emitting diodes (LEDs), which are much longer lasting. The STM also took the opportunity to replace the piece where it was originally installed. It had been lowered to allow for shop windows above. Since the windows are no longer there, the stained glass could return to its original height.

Restoration required about a year of work for the CCQ. But renovation work at the McGill station had to be completed before the art could be reinstalled. This finally occurred from May 25 to June 16, 2016; again the work was done at night. At first glance, the station has returned to its previous appearance. But if you look more closely, you can see many differences: new flooring, new travertine walls, new signage and…the same stained glass, but cleaner and better lit than before! 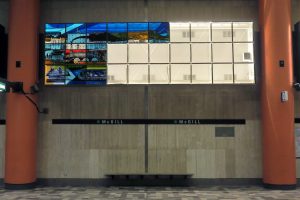 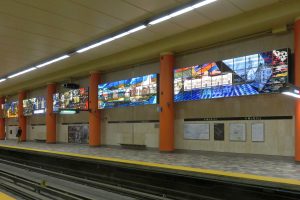 Unfortunately, Nicolas Sollogoub did not have the pleasure of seeing his restored creation, now better lit and returned to its original height. He died on July 11, 2014, well before the end of the work. But his creation remains alive and will continue to elicit the interest of McGill station users.

Public art and transit : 6 artworks for the Train de l’Est 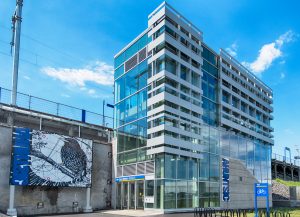 From Ahuntsic to Pointe-aux-Trembles, the Agence métropolitaine de transport is bringing beauty to the urban commute by adding art work to stations. The Mascouche Train de l’Est line has been serving eastern Montréal and the northeastern ring of the metropolitan region since December 2014. Space has been set aside for public art in each of […]