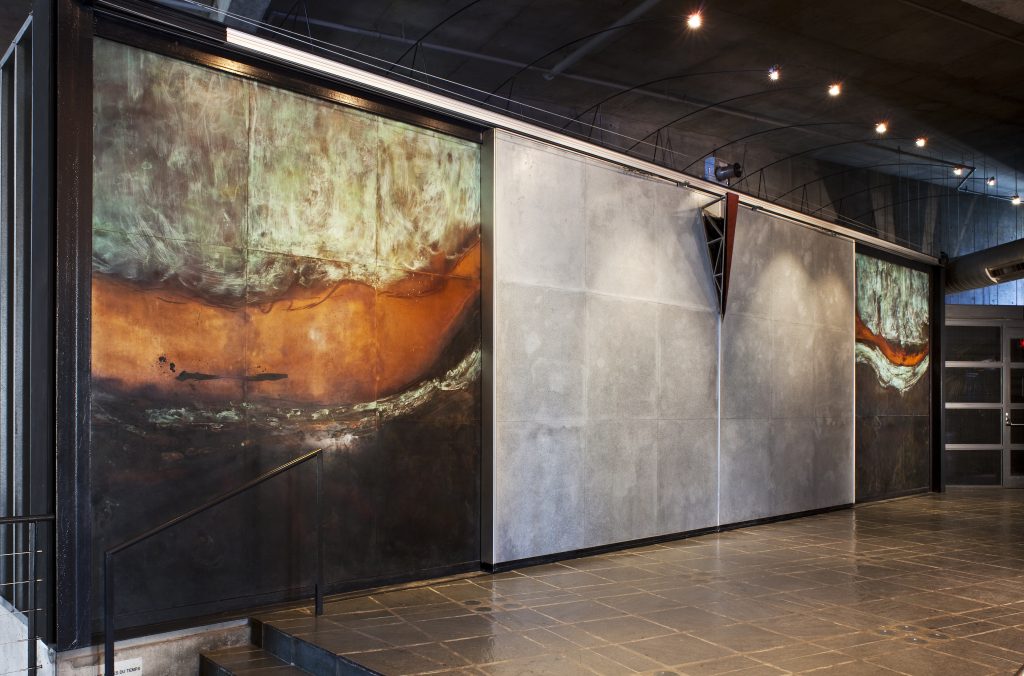 The institution, which will celebrate its 25th anniversary this year, presents three public artworks from its collection.

Rising above the site where Montréal was founded, Pointe-à-Callière is the city’s largest history museum. It is a complex comprising a series of historic and archaeological sites of national significance that showcase major periods in the history of Montréal from 1350 to the present day. The Museum has three artworks located in public spaces, whether outdoors or indoors: Entre nous by Andrew Dutkewych, Vanités 03 (Les miroirs du temps) by Nicolas Baier, and Les voiles du temps by Peter Krausz. These three pieces build, in their own way, strong bonds with the vocation of the place where they took root. 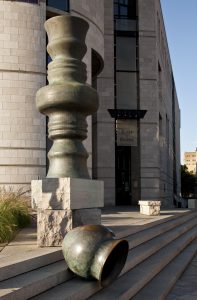 This sculpture is made up of three elements: a round bronze column, an urn and a carved stone bench. From a mass of fragmented stone volumes emerges a column that represents two negative space profiles that face each other. Poised at the foot of the sculpture is an inverted urn. The bench sits further away, near the entrance to the museum.

The work evokes human interaction throughout history. The column is inspired by mooring piles, the fragments of stone symbolize the site’s historical interpretation chain and the inverted urn is a metaphor and testament to the wealth of culture. A close reading of the column’s profile reveals two silhouettes of human figures that come together to give the work its title: Entre nous, between us. 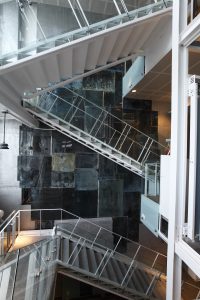 Vanités 03 (Les miroirs du temps) was expressly designed for Pointe-à-Callière’s fifth pavilion under the policy to integrate art into the museum’s architecture and environment. The work is an immense photographic composition of 75 digital images of mirrors that covers practically the entire west wall of the pavilion hall. It constitutes a reference to the museum’s mission as a space for memory and a witness to the passage of time. Moreover, the mirrors used by the artist were found in Québec and Europe, in antique stores, shops, homes and waste bins: a patient exercise that brings to mind the research efforts by historians and archaeologists. The narrative of the work produced by the technique and the methodological composition of the compartments suggest the archaeological site grid.

Les voiles du temps, Peter Krausz
Les voiles du temps is made up of four panels that create a door leading to the museum’s multimedia room. The fixed end panels are made of oxidized copper. They are overlaid with two galvanized steel panels that open to reveal the two parts of a triangular shape at the centre of the composition through which an aluminium framework appears. It conceals a bronze sculpture of a face. The triangular shape recalls the museum’s architecture.

The Museum is currently working on a planned expansion to develop about ten heritage and historic sites to form Pointe-à-Callière, the Montréal Archaeology and History Complex, a world-class cultural and tourist attraction.

Source and for more information: Pointe-à-Callière. 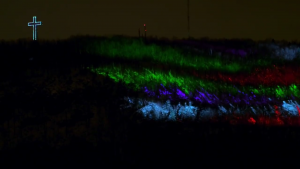 The artist Marc Séguin signs a luminous work for the 375th anniversary of Montréal. From December 11 until January 1, 2017, Montréal Lights Up to celebrate its 375th anniversary with the projection of Aurores montréales on Mount Royal. The mountain becomes the backdrop for extraordinary projections covering an area of more than 15,000 square meters. These […]