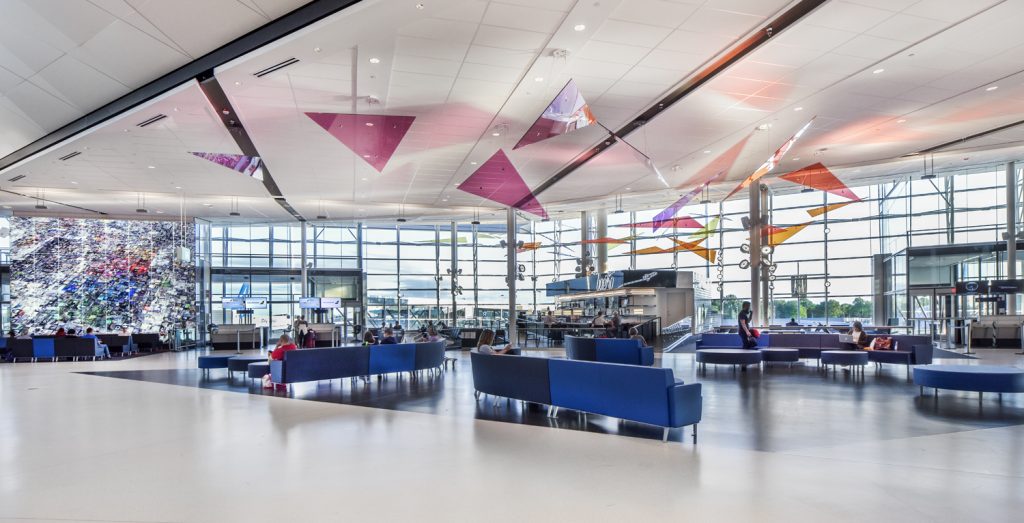 Montréal, March 15, 2017 – Aéroports de Montréal is pleased to be a featured partner of Art Public Montréal’s web site and to draw attention to several original works of art incorporated into the architecture of Montréal-Trudeau airport.

“Public art is a way of recreating a vibrant and friendly atmosphere at Montréal-Trudeau Airport while displaying the artistic innovation and cultural vitality of Montréal,” says President and CEO Philippe Rainville.

ADM sees Montréal-Trudeau not only as a reflection of the city, but also a cultural and artistic showcase. The Aerogalerie offers passengers and visitors a variety of Montréal-centred exhibitions in different parts of the terminal. Paintings by old masters and other works are also scattered throughout the terminal.

In addition, works by Montréal artists have been created specifically for the new section of the international terminal, which opened last May. The emphasis placed on visual arts and culture gives it a unique, Montréal-specific character.

The centrepiece is an installation made of glass hanging from the ceiling. Called Veil of Glass, it imitates a flock of large birds in flight while evoking the stained glass windows of Montréal. With its play of lights, this sculpture, designed by the firm Atomic3, helps create a fun atmosphere in the terminal.

Elsewhere, two large works installed at the end of the large waiting area produce a striking effect. The mural YULFLY by Alain Paiement brings to mind the view that we have before landing or during take-off. It is a mosaic composed of countless iconic images of Montréal taken from the air. These images are printed on glass, backlit and arranged by colour to form a vast tableau.

The second piece, by Manon De Pauw, is entitled Incubator. Illuminated from within, this cocoon calls for calm through the soft pulse that fills it, like breathing. It also alludes to the concept of business incubators, metaphorically referring to the creative spirit, vitality, and power of attraction that are unique to Montréal.

To see the Partner’s page: ADM.

Video of the artists selected to produce these recently delivered works:

Aéroports de Montréal is the local airport authority that has been responsible for the management, operation, and development of the Montréal-Trudeau and Montréal-Mirabel international airports since 1992. The company employs 625 people at two airport sites.

For more information on Aéroports de Montréal and its activities, visit our web site at www.admtl.com. 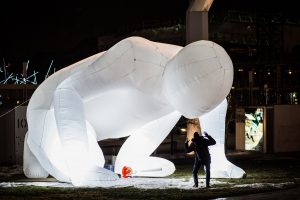 What to do at the Nuit Blanche on Saturday, March 4th? Temporary artistic interventions, guided tours, multimedia circuit… Here are the free activities not to be missed! Art After Dark on the McGill Campus McGill University – Roddick Gates of McGill’s Downtown Campus Flashlight in hand, discover renowned artworks and architectural treasures hidden in plain […]