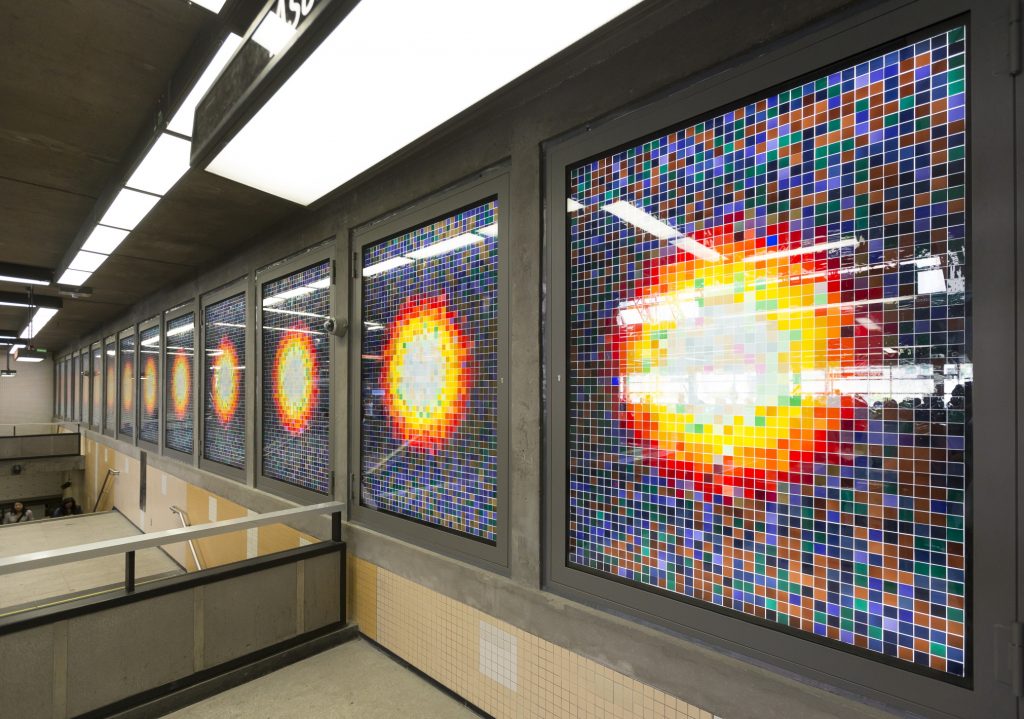 The Montréal half of the cultural exchange between Bruxelles Mobilité and the Société de transport de Montréal (STM) was fulfilled with the unveiling of Soleil de minuit, a work by Franco-Belgian artist Adrien Lucca, at the Place-d’Armes métro station.

On June 21, 2015, the first day of summer and longest day of the year, the sun was rising over Brussels. At the same time, it was almost midnight in Montréal. Armed with a spectrophotometer, artist Adrien Lucca recorded the visible spectrum of those first rays of summer in Brussels. Using coloured glass and electroluminescent diode lighting, he designed a series of stained glass-looking works that replicate the intense colours of those natural light displays. Computer software and other tools let him choose the combinations of coloured glass.

The product of the artist working closely with Belgian master glassmakers and German glass manufacturers, the virtual brightness of Soleil de minuit, expressed in 14 stages, is a symbol of the friendship between the cities of Brussels and Montréal, mobility, and the permanency of the relationship between the intelligence of sensitivity and the intelligence of knowledge, at work in all artistic creation.

“The work of art holds deep significance. It represents the sun that links two cities above all, but also the warmth of the friendship that unites the Brussels-Capital Region and the City of Montréal. Thanks to the combined talents of Adrien Lucca and glass artisans, the vitality of this friendship will be on display for all to admire at one of Montréal’s key métro stations,” stated Mr. Smet, the Minister of the Government of the Brussels-Capital Region, responsible for Mobility and Public Works.

“Public art plays a crucial role in the Montréal métro. In truth, it is an inextricable part of the experience offered to customers. The vast majority of the stations have one, two or three works of art. Amazingly, despite being opened in 1966, the Place-d’Armes station had none. That is no longer the case. Adrien Lucca now joins the very select group of artists whose works grace the Montréal métro, which includes luminaries such as Frédéric Back, Marcelle Ferron and Jean-Paul Mousseau,” added the Chairman of the STM Board of Directors, Mr. Schnobb.

This gift from Bruxelles Mobilité commemorates the 40 years of the Brussels metro and the 50 years of the Montréal métro, as well as the 375th anniversary of Montréal.

As part of this cultural exchange, the STM will also be giving a work of art to its counterpart in Brussels. The piece, currently being created by Montréal artist Patrick Bernatchez, will be installed at the end of the summer at the Brussels métro’s Trône station. 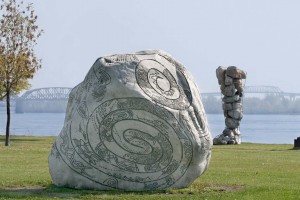 In 2017, for the 350th anniversary of Lachine and the 375th of Montréal, the Musée de Lachine and Art public Montréal present a new public art tour. Lachine, 350 years of history highlights a selection of works of art that are fragments of Lachine’s history: including the presence of First Nations, colonization of the area […]