Mariette Rousseau is a Quebec artist weaver. From 1944 to 1948 she studied at the École des beaux-arts de Québec, where she trained in textile design and tapestry making. She pursued her studies the following year in the United States, attending the Oakland College of Arts & Crafts while also working as a designer in the studio of Dorothy Liebes, in San Francisco, California. The many trips she made to Europe and Japan between1952 and 1968 enabled her subsequently to enhance her knowledge of tapestry techniques.
On her marriage to the ceramist Claude Vermette, the artist changed her name to Rousseau-Vermette.

Mariette Rousseau-Vermette has earned numerous prizes and awards over the course of her career. Her internationally recognized work is represented in private and public collections in North America, Europe and Japan.

She is a member of the “New Tapestry” movement that developed in the mid-1960s, which saw tapestry emerge as an autonomous art form, on a par with painting. Contemporary artist weavers have reinvented tapestry making, often taking a multi-disciplinary approach. Combining different techniques and mediums, they focus on the specificity of materials, whether synthetic or natural, vegetal or animal, intent on harnessing all their aesthetic potential. 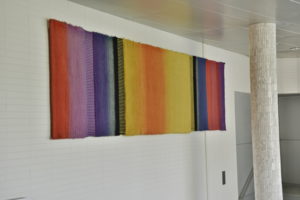