Born June 30, 1981 in Wendake, a Huron village near Québec City, Ludovic Boney was raised and educated in the Provincial capital.

Based in Lévis, Ludovic Boney works on large-scale public art projects. His portfolio includes twenty or so public art works that can be viewed at the Musée National des Beaux-Arts du Québec, the Amphithéâtre de Trois-Rivières and the Percé Geopark, among other locations. He regularly presents his work in art galleries and artist centres.

He was among the Sobey Art Award long-listed artists in 2017, and has received a grant from the Conseil des arts et lettres du Québec, along with the REVEAL Indigenous Art Award from the Hnatyshyn foundation. 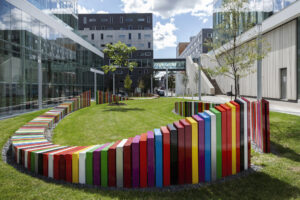