Patrick Bérubé obtained a Master’s Degree in Visual and Media Arts from Université du Québec à Montréal in 2005. A finalist for the Pierre Ayot Prize in 2010 and 2011, he has shown his work at a number of national and international exhibitions and major events. He gained recognition, notably, in 2010 at the exhibition “This is not a Casino” at Casino Luxembourg in Luxembourg City and at the Villa Merkel in Germany. In 2005, he won the jury prize at the 3rd Manifestation internationale d’art de Québec. He has also completed several artist residencies, including the Conseil des arts et des lettres du Québec in Spain in 2009, in Paris in 2007 and in Bordeaux in 2011. He held his very first solo exhibition in New York City in January 2013. Patrick Bérubé is an active member of the Clark Gallery and a founding member of the Collectif Pique-Nique.  Since 2010, he has created three works integrating architecture. He works mainly in sculpture, installation and public intervention. Space and place are very important in his work, both in the creative process and in the work itself. He poses questions about our behaviours and reactions to different situations of powerlessness and vulnerability. By creating anomalies and discontinuities, Patrick Bérubé destabilizes, surprises and compels the passer-by to stop and ask questions about these irregularities. 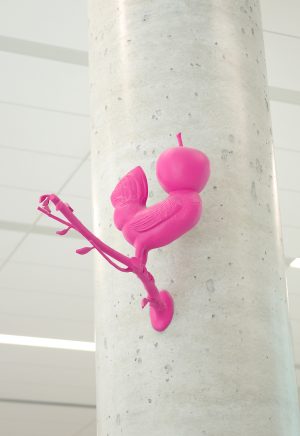