Louis Emmanuel Chavignier (1922–1972) was an internationally renowned French sculptor. After a brief stay at the École nationale des beaux-arts de Paris, he went to work at the Louvre, where he restored objects from Egyptian and Chaldean antiquity. During the 1950s, he began to create his own artworks, influenced by his work as a restorer.

He executed a number of works of public art and integrations of art with architecture in France, notably at Vitry-sur-Seine and Blanc-Mesnil. Also on public display is his Le vaisseau lunaire, produced for Expo 67, on the shore of Lac des Nations in Sherbrooke. 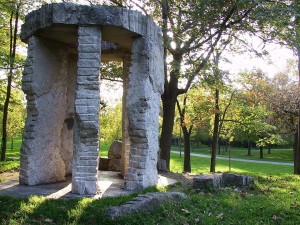