Reynald Connolly was born in Ville Lasalle (Quebec) in 1944. As a self-educated artist, he would build his path impulsively. He left his father’s house at the age of 15 and learned the trade by visiting artists. He participated in live art happenings at the Clock Tower Piers with Serge Lemoyne by illustrating poems of Denis Vanier and Claude Péloquin. He particularly strayed far from traditional dogmas and schools. He learned by visiting artists and traveling to the United States. During the 60s and 70s, his pieces merge optical art and surrealism, where shapes become abstract.
As a talented and imaginative artist, Connolly mastered drawing, watercolors, engraving and painting. He also created cinema and theater posters. In the 80s, his creativity was inspired by figurative art, but always retaining an element of humor, often grinning or critical. This committed and non conformist drawer used shapes and allegory to witness the world in which he lives.
Throughout his career, Connolly was awarded several bursaries. As a prolific artist, he participated in nearly a hundred solo and group exhibitions. He also created many pieces of public art, notably for the Longueil courthouse, the Esso building, the Charles Des Baillets water treatment plant in Lasalle and the Valmar pharmaceutical plant in Saint-Jérôme. His pieces lie currently in private collections and museums. In 1995, the Musée d’art contemporain des Laurentides dedicated a retrospective exhibit to him and his work.
Since having his work showcased at the prestigious Galerie Gilles Corbeil at the beginning of his career, Connolly himself now manages the sale of his pieces and he doesn’t hesitate to invest in marginal places such as the Inspecteur Épingle taverne to meet loyal collectors. This allows him to live of his art. 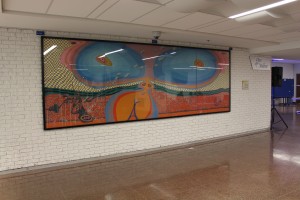