Maxime Real del Sarte was born in 1888 in Paris and grew up in a family exposed to the world of art. Italian-born painter Andrea del Sarto – a man invited to Paris by Francis I of France – was one of his ancestors. Real del Sarte is the nephew of composer Georges Bizet and the favorite pupil of Paul Landowski, director of the École de beaux-arts de Paris in 1939 and the man sculpted Christ the Redeemer in Rio de Janeiro.
Real del Sarte was admitted to the École des beaux-arts de Paris and became president of the Camelots du Roi. He was incarcerated several times as he was a firm believer in the Action française, a nationalistic and monarchic movement. Today, the Action française’s summer university bears his name.
The artist’s career was interrupted by his participation in the First World War. After the war was over, he had his left forearm amputated but that did not stop him from pursuing his career as a sculptor. He created the model and hired others for the scissor work. Real del Sarte then finished a piece that he started in 1914, Le Premier toit, which earned him the Grand Prix national des Beaux-arts in 1921. The artist’s popularity exploded and he received many orders, most of which for commemorative monuments. The artist favored pure lines and tall constructions to symbolize the soul’s elevation. He pursued his career up until the 1950s. He is considered as the sculptor to have built the most monuments throughout France of his generation. Though he worked in a traditional manner, his artistic work adhered to France’s resurgence of religious art following the First World War. 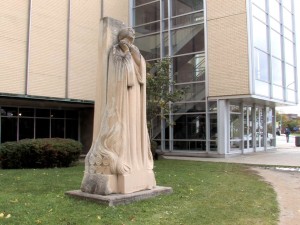