Yves Gendreau is primarily a carpenter. He learned to sculpt professionally by working with artists in Réseau des centres d’artistes autogérés du Québec (RAACQ). He undertook classes in environmental design at the UQAM from 1980 to 1983. In 1987, he co-founded the 3e impérial, a modern art test center located in Granby and becomes a member of the RCAAQ. Ever since he founded the center, he undertook an administrative and technical role. Yves Gendreau learned how to sculpt alongside other artists.
The artist receives bursaries, which allowed him to participate in many collective and solo exhibitions in Quebec and France. He describes his studio set up as “sculpture / action”. Since 2000, Gendreau has participated in contests organized by the Programme d’intégration des arts à l’architecture. His first ordered creation was for the Centre intégré du ministère des Transports at Saint-Jean-sur-Richelieu, in 2003. The artist also created sculptures for the De la Concorde metro station in Laval and for the promenade Samuel-de-Champlain in Quebec City.
The artist frequently imagines a metaphor of a field with ranging poles in order to create sculptures that are formed by monumental arrangements. His pieces are mostly showcased in the city or in nature for symposiums. Gendreau displays a set up that is in situ, resembling a field that is open to the public. He dresses up as a worker and plays an active role in the process by delimiting a perimeter in which he sets up warning signs, piles up tools for which he has no use and stacks of raw materials which he uses from one set up to the other. He calls out to the public for help, preferably seeking ”non-qualified” people. The artist creates ephemeral, yet often memorable sculptures. He denounces nonproductivity, the absurd and an individualistic vision of the world with excess. 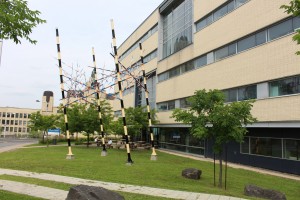