David Moore was born in Dublin and moved to Montréal in his early twenties. He is a graduate of the École des beaux-arts de Montréal and holds a master’s degree in art education from Concordia University, where he taught from 1970 to 2006.

Moore’s work has been in many exhibitions in Canada, the United States, and Europe. From 11 November 2007 to 6 January 2008, the Musée d’art contemporain des Laurentides presented Architecturer l’absence, a retrospective of his work over the previous 30 years. Moore also produced various public art projects, among them aLomph aBram (1991), an imposing artwork installed in the turret of the Pavillon Charles-Baillairgé at the Musée national des beaux-arts du Québec. 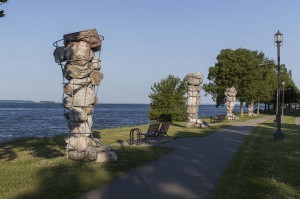