Henry Saxe was born in Montréal and attended the École des beaux-arts de Montréal from 1956 to 1961, then studied printmaking with Albert Dumouchel. His work has been presented in numerous solo and group exhibitions, including at the Biennale de Paris in 1963 and 1968, as well as the Cent jours d’art contemporain de Montréal, in 1985. In 1978, with the painter Ron Martin, he represented Canada at the Venice Biennale. In 1994, a major exhibition of his works was held at the Musée d’art contemporain de Montréal. Saxe has lived and worked in Tamworth, Ontario, since 1973. 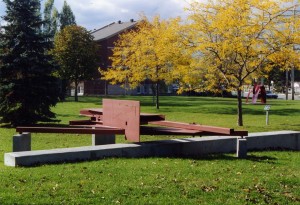