Shanna Strauss is a Tanzanian-American artist currently living in Montreal. She completed a Bachelor of Fine Arts degree at the California College of Arts in 2003, and has exhibited her work in solo and group shows in Tanzania, the United States and Canada. Noteworthy achievements include her art being featured in the East African Biennale in 2009, a solo exhibition The Floating Homeland that opened the Vue D’Afrique 2015 Rally Expo Festival in Montreal, and a collaborative project and exhibition Re-membering: A sister Project that took place in Oakland, California in the summer of 2015. More recently, she was commissioned to create work for the Égéries Noires group exhibition at Montreal’s Place des Arts, in February 2016. She is currently working on an ongoing art project, with another Montreal based artist, Kevin Calixte, called Changemakers.

In conjunction with her art practice, Shanna has engaged in community work and organizing for the past 10 years, working with diverse youth groups in different countries. In 2014, she completed a Master of Social Work degree at McGill University with a focus on International and Community Development. Integrating arts-based programs and interventions in her community work, Shanna believes passionately in the power of art to create individual, community and social change. 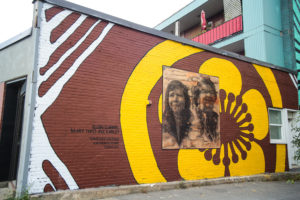