Born in Sault-Sainte-Marie, Gordon Webber studied at the Ontario College of Art (1924-1927) and the Art Students League (1928-1930) in Toronto, before moving to Chicago to study at the New Bauhaus (1939-1942), under Lazlo Moholy-Nagy, exiled from the German Bauhaus. He moved to Montréal in 1943, where he taught Bauhaus-inspired design at the McGill University School of Architecture.

Webber also taught at the art school of the Montreal Museum of Fine Arts. He quickly became involved in the Montréal artistic community. In 1948, he signed the Prisme d’Yeux avant-garde manifesto with others, including Alfred Pellan. In 1949 he testified before the Massey Commission on the Arts, Letters and Science in Canada, together with Pellan, Dumouchel, Lapalme and De Tonnancour. He chose geometric abstraction in the work exhibited at the Non-Figurative Artists Association of Montreal and the Montreal Museum of Fine Arts. A member of the Canadian Group of Painters, he has exhibited in Canada and internationally.

Although little known for his public art, much of which has been destroyed, Webber designed several Montréal and Ontario geometric abstract pieces. They include sculptures, mural mosaics in brick, glass stone and ceramic or vinyl, and have been commissioned by such modern architects as Parkin Architects, George Eber and Vincent Rother. 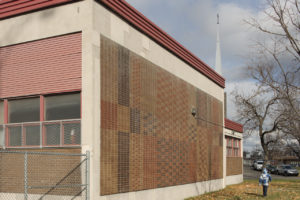