Marshall Wood, born in 1820 in Manchester, England, began to work professionally in London in 1854. His career took flight in 1867, when his sculpture The Song of the Shirt was exhibited at the Salon of the Paris World Fair. The event provided him with recognition throughout Europe and ensured commissions from the colonies and other continents, including that for the statue of Queen Victoria in Montréal. From 1871 to 1873, Wood lived in Canada, where he produced, among other things, the funerary monument erected by the Honourable P.-J.-O. Chauveau, leader of the Senate, to the memory of his three daughters in the Ursulines Chapel in Québec City, as well as a number of busts. Wood died in Brighton, England, in 1882. 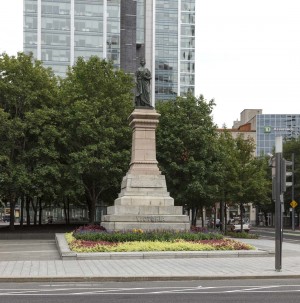