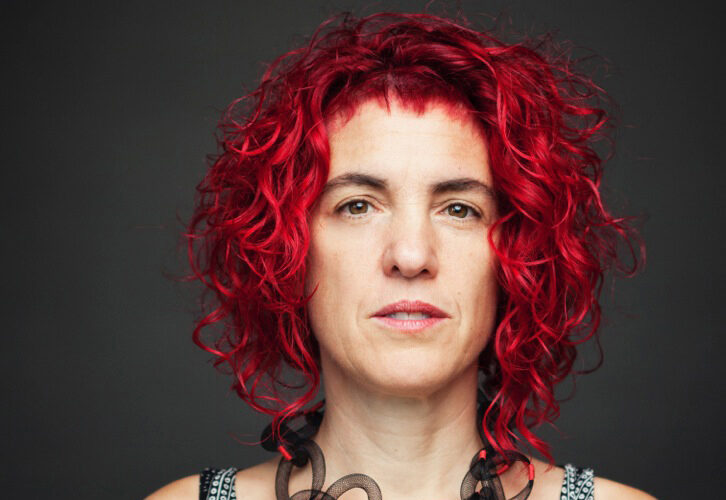 Sylvette Babin has been the head of Esse arts + opinions magazine since 2002. She has an MFA in Studio Arts from Concordia University. As a performance artist, between 1997 and 2015 she participated in a number of art events in Canada and internationally.

As an author, she has published in several magazines, artist catalogues and books and was the curator for events such as Les Convertibles, produced by Culture pour tous (2006), Infraction 08 (Sète, France, 2008) and Il Nostro Gusto (Saint-Hyacinthe, 2009).

She has also taught ‘art and urban theatre’ at Collège Shawinigan, and visual and media arts at Cégep de Saint-Hyacinthe. 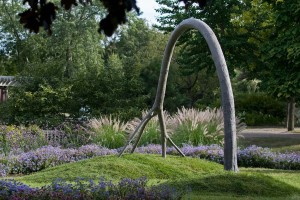 L’arc
Michel De Broin
“I am touched in several ways by this trompe-l’oeil sculpture. At first glance, this curved tree looked to me like a kind of escape, an improbable contortion to flee deterioration of the nature environment and urban development. Then, when I discovered that L’arc is an homage to the Chilean community and for President Salvador Allende, the metaphor of the individual trying to reconnect with their origins, find their roots, made perfect sense. As a native of Gaspé based in Montréal, I am particularly affected by issues of separation and ‘exile’. I like to imagine this meeting of leaves, fruits and roots as being the ultimate reunion of beings and places that have created us.” 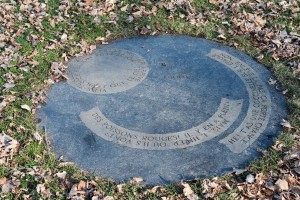 La montagne des jours
Gilbert Boyer
“The five granite disks that form La montagne des jours is a defiant reaction to the usual monumentality of urban art. They are almost invisible, you find them by chance during a walk on Mount Royal, if you are paying attention to the ground surface. I particularly like this discreet and respectful approach to the natural landscape where they are set. All the more reason for the snatches of conversation engraved in each stone to immerse us into reveries that take us far away. In our imagination, the work becomes monumental, as we furtively drop into the intimacy between two friends, lovers and let ourselves be carried off by the poetry of the space and the words. “Let’s go by the Lady Road, something I want to show / Listen … it’s time to leave, evening is in the breeze / Thunder / From time to time I look up, and there’s the landscape. That way the pleasure lasts / It’s beautiful, right? When I want to read the last pages of a good book, I plant myself here / Far / Far / Far / Fly over the mountain till you fall asleep” G. Boyer ” 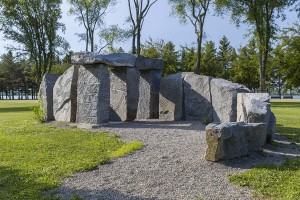 Vortexit II
Bill Vazan
“Rocks and rock collecting are a passion of mine, I am attracted by the light touch of Bill Vazan’s sculpture technique. He lets the stone speak for itself. Here’s a thoughtful arrangement of massive granite blocks with delicate engravings of ocean waves and spray. These designs reveal the artwork’s human source. It seems to be from another age. It also calls to me through its connections to land art, which has always fascinated me, and by its invitation to stroll through its spiral, enter the vortex and touch the patterns cut into its rugged surface (you must see the beautiful rubbings the artist has done with them). Moreover, at the risk of triggering other forms of remorse with regard to the don’t-touch rule for art, I am thrilled to see children (and sometimes adults) climbing on the sculpture, as they would on rocks at the seaside. What better sign of art being integrated into the landscape and community?” 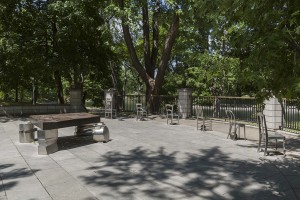 Les leçons singulières (volet 2)
Michel Goulet
“I walk past this artwork several times a week and, each time, it reminds me that it’s important to take a break to admire the green oasis that it adorns. To my mind, Les leçons singulières (both in its second iteration at the Belvédère du parc Lafontaine and in the first on Place Roy), in addition to the bottomless chairs of Les enjeux (at Théâtre d’Aujourd’hui), always seem like a call for the “non-utilitarian” vocation of many urban artworks, an aspect that is very important to me. Here, the metal chairs — too cold in the winter, too hot in the summer, or too far away from each other to allow personal conversation — are distinct from the urban furniture and stand for the need for the objects that decorate our cities to maintain a poetic and playful purpose. This doesn’t mean they lose their symbolic power and ability to make us think about questions of encounters and user-friendliness they may symbolize. Strangely, during this time of pandemic and social distancing, the chairs scattered here and there may now be interpreted as invitations to speak together, at a distance.” 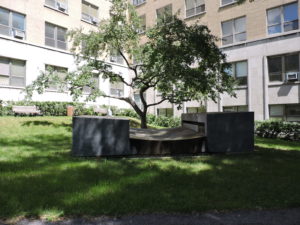 Les tables de jour 1
Jocelyne Alloucherie
“It’s important to know that this artwork is a fountain, although I’ve never seen it working. Even when dry, it is still majestic, with its refined granite tables, arranged in perfect symmetry near where two walls of hôpital Notre-Dame meet, and seemingly framing a tree. A beautiful balance between its geometric forms and the more anarchic-seeming shapes of the branches. I love this haven of peace, it invites contemplation and meditation. I imagine people coming here to site for a moment, probably health care workers on their break, or people visiting a loved one in the hospital. Perhaps sometimes people come here to mourn. I also think about the soothing sounds that water running on the smooth stone surface could offer, will the crab-apple blooms for the 30th time. So I am calling on the owners of all public art to ensure the works can function and are maintained to last across the years. I like to remind myself that this piece is a fountain and that one day I will finally be able to hear the trickling of its stream. ** We have been told that the fountain has a structural problem but the CIUSS has a project to repair it. ”