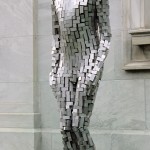 Born in London in 1950, Antony Gormley studied archaeology, anthropology and art history at Trinity College, Cambridge. Travelling in India from 1971 to 1974, he was introduced to Vipassana meditation. On his return to London, he studied sculpture at the Central School of Art and Design, Goldsmiths’ College, and Slade School of Fine Art. By thoroughly exploring the body as subject, tool, and material, Gormley restored the image of the human form in sculpture. In doing so, he was one of the principal architects, along with Tony Cragg and Anish Kapoor, of the revival of British sculpture in the 1980s. His Angel of the North (1998) in Gateshead, England, and Quantum Cloud (1999), located in Greenwich, on the Thames, are among the most famous of contemporary British sculptures, and the most monumental since those created by Henry Moore. Antony Gormley was awarded the Turner Prize in 1994, the same year that a major retrospective of his work that had first been shown in Malmö, Sweden was presented in a number of major European museums. American Field (1991), one of his most celebrated works, was exhibited at the Montreal Museum of Fine Arts in 1993.

Julien Abadie
“Digital beings are today’s golems: by etching a few algorithmic instructions in them, we give them an existence. Watching them come to life with terrifying precision, we are reminded of our own situation. We are living beings who have learned so well how to create life out of nothing—even something as dead as computer codes—that from now on we’ll find it hard to distinguish what differentiates us, not from life, but, specifically from the inanimate. In the giant pixels that form this sculpture, should we read the birth of the first technological singularity, or the approaching end of our own?”