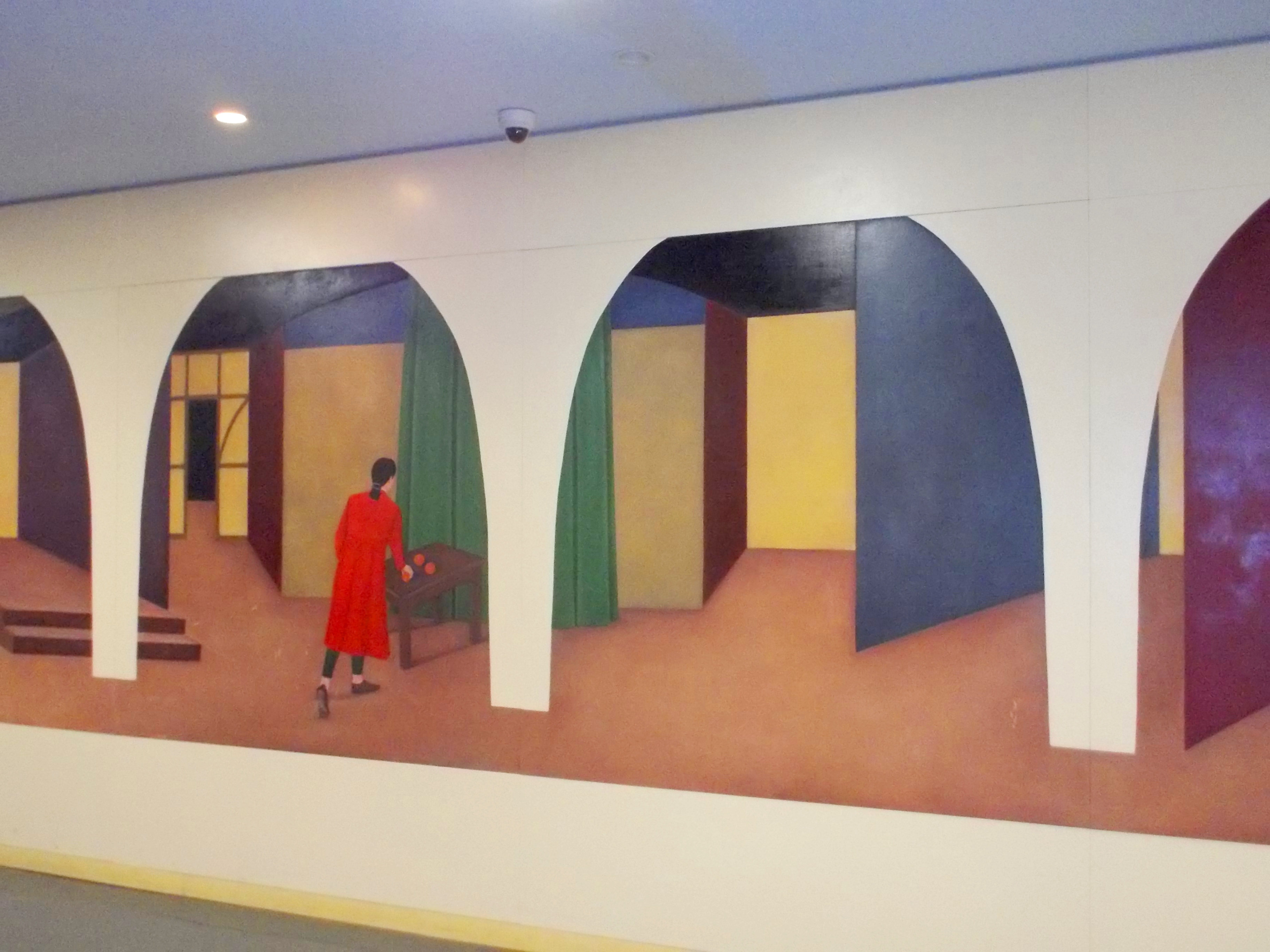 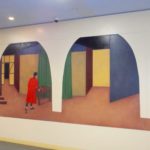 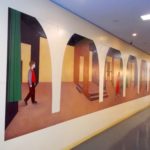 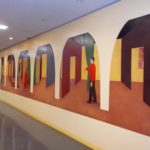 Sylvie Bouchard lives and works in Montreal. She studied visual arts at the University of Ottawa and has been active as painter since the early 1980s. She has been the recipient of numerous grants from the Conseil des arts et des lettres du Québec and the Canada Council for the Arts. Her work has been presented in solo exhibitions at various venues, including the Musée d’art contemporain de Montréal (2005), the Musée régional de Rimouski (1997) and the Southern Alberta Art Gallery in Lethbridge (1993). She has taken part in many group exhibitions across Canada and abroad. Her work is represented in a number of public collections, including those of the Montreal Museum of Fine Arts, the Musée d’art contemporain de Montréal, the Musée national des beaux-arts du Québec, the Musée régional de Rimouski, the National Bank of Canada in Montreal, the Royal Bank of Canada in Toronto and the Canada Council Art Bank, as well as in numerous private collections.

This mural by Sylvie Bouchard reflects her artistic preoccupations during the 1990s, which focused on architecture, space and painting technique.

On entering the library, spectators pass by a long wall painting showing an architectural interior divided into several rooms by a series of arches. The space depicted is strange: the room divisions are two-dimensional and devoid of baseboards and mouldings; there are no windows giving onto the exterior; and the absence of furniture offers no hint as to the function of the place. This artificial architecture is nonetheless linked to the real space it inhabits. For example, the arches that separate the rooms reproduce the shape of the building’s windows; the human figures portrayed, with their eye-catching red garments, seem to be passing through, just like the users making their way into the library; and the glazed colours of the oil medium echo the tones of the leather-bound books.

The rooms succeed one another as spectators advance, obliging them to cross imaginary thresholds and to allow their gaze to absorb the painting’s enigmatic ambience before they reach the more familiar spaces of the college library.

Fully integrated into the wall of the building, the mural occupies the entire space. Since it lacks a three-dimensional frame the image seems to blend with the library, leaving spectators with the sense that they are occupying both an imagined and a real architectural space.

In executing The Coloured Rooms, Sylvie Bouchard was exploring space, but she was also drawing upon artistic tradition. The interiors depicted are composed of flat fields of colour reminiscent of the paintings of geometric abstraction. But here, presented according to the rules of mathematical linear perspective in use since the Renaissance, they look more like stage sets, creating an atmosphere of mystery. Other aspects of the work, aside from the use of perspective, hark back to classical painting: the curtains, which recall countless images of drapery; the colour red, used frequently in formal portraits; and the painting technique itself, whose glazed oil surface is comparable to the finish of a fresco. It is even possible to associate the oranges being transported by one of the central figures with those that appear beneath the window in the Arnolfini Portrait by Jan Van Eyck. The Coloured Rooms merits contemplation, for, like the library, it is a space of knowledge.