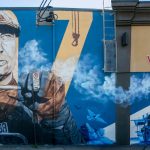 ASHOP PRODUCTIONS is a street art production and artists management agency based in Montreal. Now internationally renowned, it is the result of the work and dedication of the ASHOP CREW, which has managed to ensure the success and growth of the company for 10 years now. Its mission is to produce large-scale public art projects and highlight the talent of the artists they represent. To this day, ASHOP has at its disposal creative spaces and produces as many murals as custom art projects in several international cities, such as Montreal, Toronto, Miami, Los Angeles, Paris, and Hong Kong.

A superb solo piece by A’shop crew’s Dodo Ose, this mural is located on the corner of Hochelaga and Mousseau streets in Montreal. It was produced with the help of local organisations YQQ and Solidarité Mercier Est. The mural is an ode to the spirit of the hard working proletarians that built Mercier-Est literally from the ground
up. The industrial past of the area is reflected in the background with silhouettes of the cranes that peppered the shorebank’s. The boat is also a nod to the now demolished Canadian Vickers shipyard, an industrial powerhouse that employed many of these working class heroes. Using his famous transparency technique Dodo also overlayed 1907, the foundation date of Village Tétreaultville, now known as Mercier-Est. His central character dominates the scene while looking of to the distance;
perhaps to a brighter future where generations will benefit from the economic prosperity that he and his counterparts built through blood, sweat and tears.