The Town of Mount Royal and Art Public Montréal are proud to announce their partnership to further showcase various collections of public art of the Greater Montreal area. Four works and three new artists have been added to our collection!

Three of these works are located near Connaught Park. Anne Kahane’s Mother and Child was created in 1959 during the construction of the original Rockland Centre. The sculpture stayed there until 2008, when it was moved to its current location near the Reginald J. P. Dawson Library. The second work, Man and His Community, was donated to the Town by the Rossy family in remembrance of former mayor Vera Danyluk. Anachar Basbous created the work in his studio in Rachana (Batroun), Lebanon in 2010. The statue was erected in the Pierre Elliott Trudeau Rose Garden in the fall of 2011. The third work, entitled //\\//\\, is a mural created by Ilana Pichon in collaboration with MU. This particular title, inspired by intersecting train tracks, pays homage to the history and heritage of the Town of Mount Royal.

Finally, Praxitelis Tzanoulinos’ sculpture, Dedication to the Olympic Ideals, can be found in Gaia Park. This green space was named in honour of the Greek goddess of the Earth in 2009. The commissioned work was shipped from Greece and donated to the Town by the families of Paul and Melpa Kamateros, Nicolas Tsatas, Jimmy Christopoulos, and Nicolaos Arcolakis.

These additions represent a first step towards showcasing works from the Town of Mount Royal’s public art collection.

About the Town of Mount Royal

The Town of Mount Royal, recognized for its avant-garde urban design, was designated as a National Historic Site of Canada by the federal government in 2008. Building on a long tradition of excellence in urban planning and development, this garden city stands out for the tranquil charm of its road network and the quality of its residential architecture. Since the 2000s, the Town of Mount Royal has made significant investments in public art, adding to the number of outdoor murals and sculptures on its territory. In 2017, the Town renewed its cultural policy, which was originally adopted in 2008.

To view the collection: Town of Mont Royal’s page. 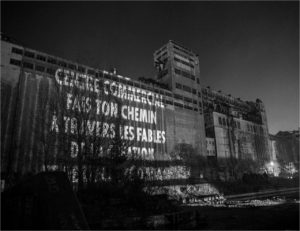 On the first anniversary of Leonard Cohen’s passing, the Musée d’art contemporain de Montréal invites Montreal and Leonard Cohen enthusiasts to come together at the foot of Silo No. 5 to commemorate the remarkable wordsmith. The MAC will be inaugurating a silent, majestic installation by artist Jenny Holzer as part of its Leonard Cohen: Une brèche […]