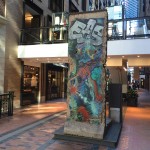 In the late 1960s, students in Berlin realized that the Wall was a marvellous place to display their revolutionary messages. The Wall thus became covered with anti-imperialist and, sometimes, anti-American slogans. In the 1970s, the first graffiti made their appearance. The transformation of the wall into a smooth, continuous surface contributed to this process. At the beginning, artists were content with simply signing their names. Later, certain “frescoes” reached up to 100 metres in length.

The City of Montréal chose the Ruelle des Fortifications, adjacent to the Montréal World Trade Centre, as the site for the installation of the segment of the wall. A crossroads of international trade, a site of openness, tourism, and transit, this site was the most appropriate to host this “witness to history” that stands, in fact, where the fortifications of Montréal once stood.