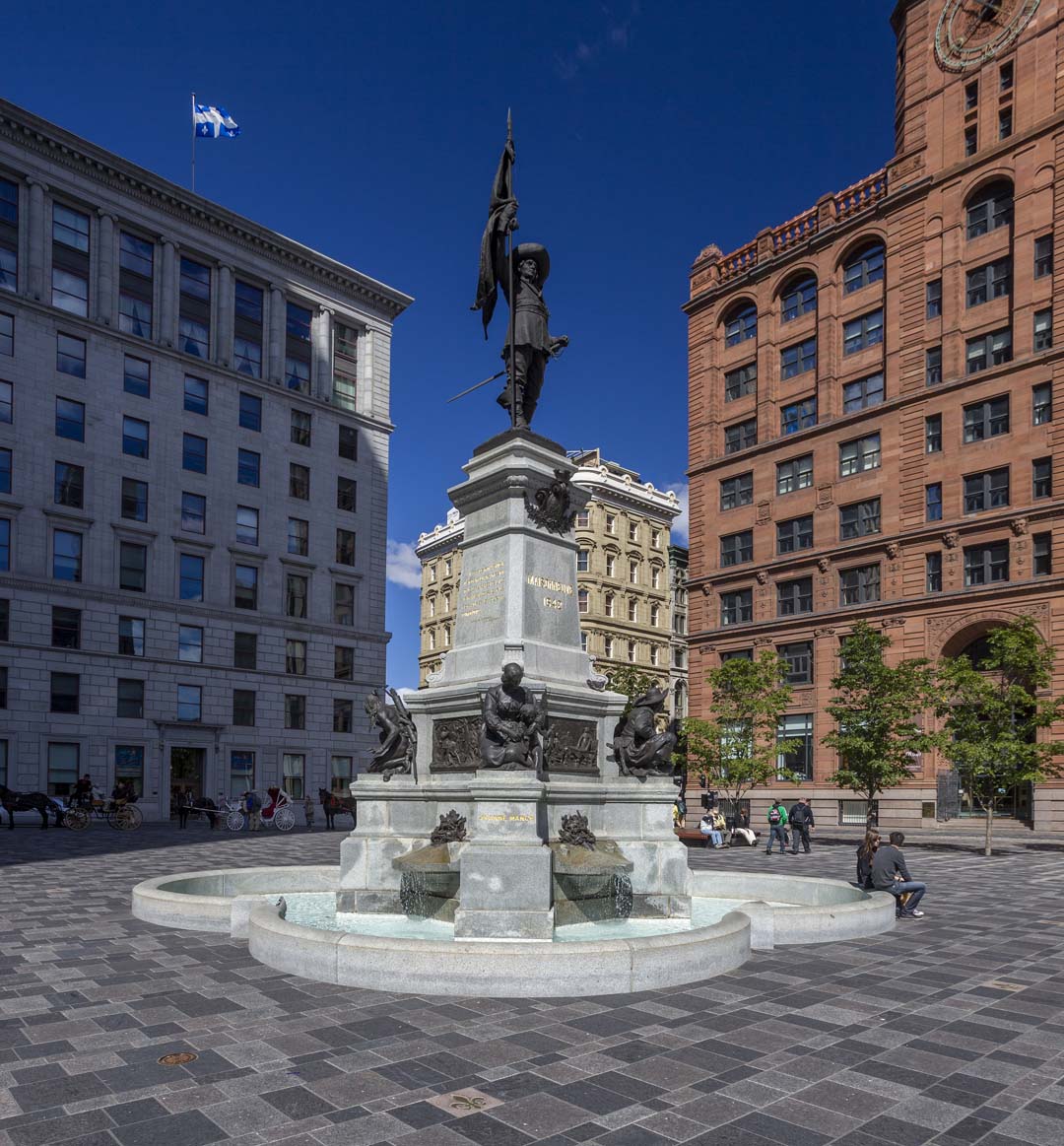 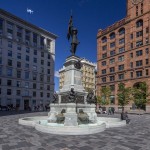 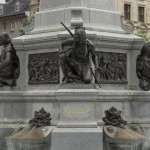 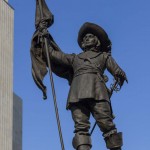 The monument, standing in the centre of a water basin formed of four half-circles, is composed of a pedestal and a square column. The fourteen bronze elements of the composition are articulated around these architectural elements designed by architects Mesnard and Venne. Place d’Armes was the perfect spot to celebrate the founder of Montréal, as it was the central square of the historic city.

At the top of the square column is the statue of Maisonneuve, founder and first governor of Ville-Marie. His eyes fixed on the horizon, he holds the flag of the king of France in his right hand; his left hand rests on the pommel of his sword.

Just below, on the pediment of the column, is a scroll bearing the first coat of arms of the city of Montréal, designed by the city’s first mayor, Jacques Viger.

The Statuary Groups
A bit lower, leaning against each corner of the column, statuary groups represent four people linked to the history of the foundation of Montréal. The male characters are armed and on the lookout, testifying to the state of mind that ruled at Ville-Marie at the time.

On the southwest side is Jeanne Mance (1606–73), the first lay nurse in North America and founder of the first hospital in Montréal, the Hôtel-Dieu. A woman of character and devotion, who both dispensed healthcare and taught, she is portrayed with a soft, calm face, bandaging a child’s hand. On 17 May 2012, Jeanne Mance was recognized by the municipal council as a founder of Montréal on an equal footing with the founder Paul de Chomedey, Sieur de Maisonneuve.

On the southeast side is Raphaël-Lambert Closse (1618–62), major of the garrison and the governor’s lieutenant. A soldier by trade, he lies in ambush, ready to strike. He looks alert and holds his dog Pilotte in the crook of his arm.

On the northeast side is Charles Lemoyne (1626–85), who, after serving in Huronia, moved to Montréal, where he was made responsible for the security of Ville-Marie. Embodying the typical colonist, both farmer and soldier, he is armed with a sickle and a gun – the symbols of survival.

On the northwest side is an anonymous Iroquois warrior. The adventures of Iroquois warriors, recounted in the Jesuit Relations, had caught the sculptor’s imagination since childhood, and were later used as themes in many of his works.

The Bas-reliefs
Between the lateral groups are four bas-reliefs that portray important events related to the foundation or development of Montréal.

The bas-relief on the south face depicts the signature of the act of foundation of Ville-Marie in Meudon, France, by the members of the Société de Notre-Dame de Montréal, which was established with a view to creating a settlement on the island. From left to right are Baron Gaston de Renty; Pierre Chevrier, Baron of Fancamp; Jean-Jacques Olier; and Jérôme Le Royer, Sieur de La Dauversière.

On the west face is an illustration of the exploit at Place d’Armes, featuring Maisonneuve alone facing an Iroquois chief and his army, stealing victory on the very site of today’s Place d’Armes.

On the north face is a portrayal of the heroic death of Dollard at Long Sault. In an act of bravery, Dollard and 17 companions ventured far from Ville-Marie on a scouting mission to block the route to possible attack. They had solemnly sworn to persist to the end. Ambushed in a small abandoned fort, surrounded by more than 300 warriors, they had no choice but to keep to their vow.

On the east face is an illustration of the taking possession – that is, the celebration of the first mass – on the day of arrival of Montréal’s founders, on 17 May 1642, by Father Barthélémy Vimont, Superior of the Jesuits.

The Waterspouts
At the bottom of each face of the pedestal is a bronze mask covering a spout that pours water into the basin. These four mythical figures, inspired by different portrayals of the god Bacchus, symbolize the elements forming the environment of the people featured.

Three of the masks are decorated with elements borrowed from the plant and animal kingdoms: the one on the west has a horn; the one on the north, a fish; and the one on the east, a ram. The fourth is decorated with items associated with the Aboriginal world: it is topped with an animal pelt with a fox’s head from which a feather sticks out, overlapped by a quiver and a tomahawk. The masks dilute the dramatic nature of the monument by celebrating the good things in life.