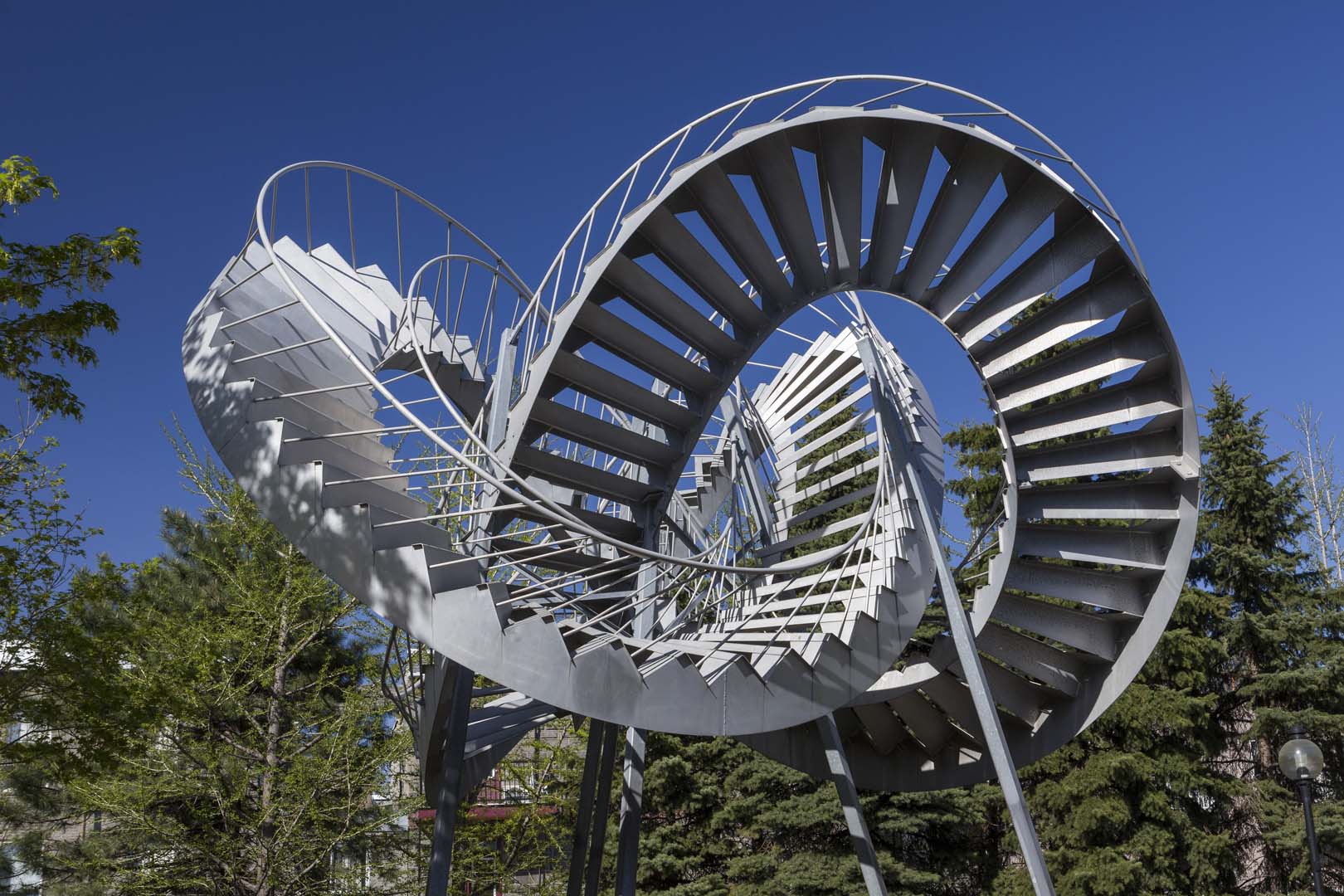 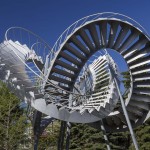 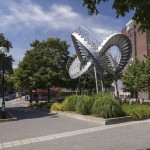 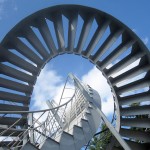 Révolutions encapsulates the neighbourhood’s specific visual references. To the obvious reference to the typical Montreal outdoor staircases is added the stairway to the Métro station that is under the artwork, the metal structures of the Jacques Cartier Bridge, and the rides in the La Ronde amusement park nearby. The aluminum sculpture also evokes universal symbols such as recycling (the Moebius strip) and infinity, as well as art history in its allusion to Vladimir Tatline’s Monument à la IIIe Internationale.

With its multiple references, the knotted staircase is presented as an enigma in the space. The artwork offers a transition from utilitarian to non-utilitarian, from real to poetic, from banal to sublime. It is a “revolution” in the sense of a continuous cyclical motion turning around itself.

The artist, who has had numerous permanent and temporary artworks on display in the public spaces of Montréal, generally points to a political meaning via metaphor. Here, creating a dialogue between the two meanings of the word “revolution,” the artwork may be understood as advocating for change within continuity rather than in rupture. In de Broin’s view, “The staircase makes us think of what returns without repeating, transformed in its cycle. We can all project ourselves into this curved space and enter the game of revolutions” (2003).

Julien Abadie
“This monumental sculpture seems to hide the same mystery as Escher’s optical illusions. Your eyes shift, unable to figure out where to start, and just when you think you’ve understood the piece, it quickly escapes you. But the essential is elsewhere. The Révolutions staircase, first and foremost, follows the same trajectory that paralyzes our era: an infinite loop, a swirling immobility. What is involved here isn’t really a movement; it’s a failed ascension, a roundabout walk, a tautological progression, a revolution in the gyratory sense. It’s no small accomplishment to be able to stop passersby, catching them exactly where they are: in this age of inertia.”
Anne-Claude Bacon
“"Michel de Broin’s piece is playful and conceptually rich: it refers as much to Montréal’s winding staircases as to the amusement park rides at La Ronde. The staircase turned into itself is a call to infinite repetition or permanent revolution (depending on your point of view!). I’m very enchanted."”