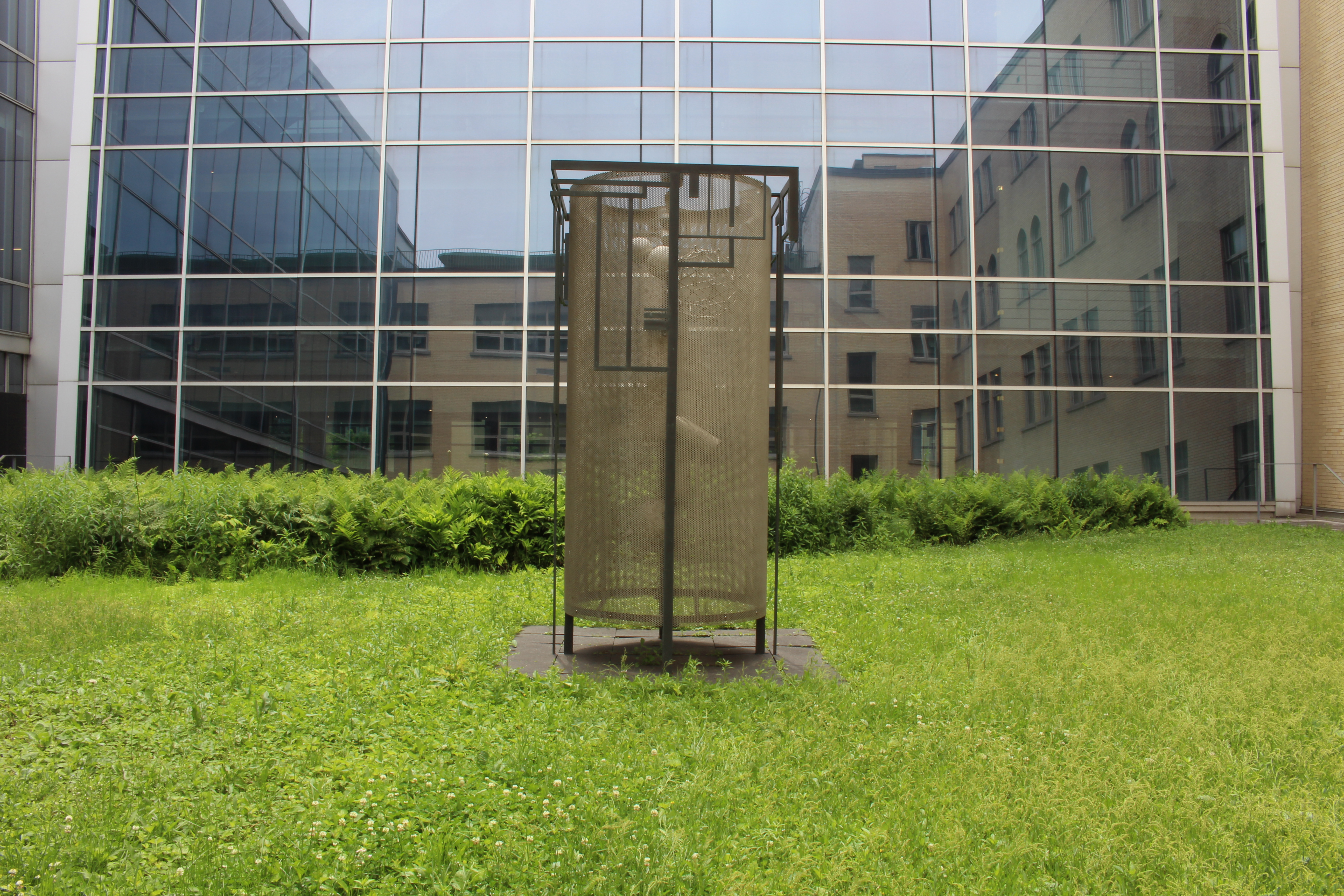 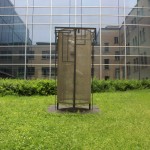 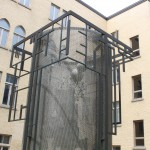 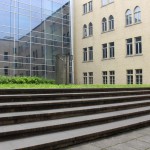 Saint Thomas is a sculpture integrated to the architecture of the Faculté de l’aménagement of the Université de Montréal, once a convent. It was originally built in 1936 and undergone several renovations to enlarge it since then. The last renovation in 1998 earned an award for excellence in architecture and led Gilles Mihalcean’s project
win the competition for the Programme d’intégration des arts à l’architecture et à l’environnement. The artist wanted to reproduce the succession of the barriers which already consisted the space of the courtyard (glass walls, stone staircases, grassy surface) in order to respect the site’s austere character and its aesthetic, which binds the tradition and transparent effects.
It’s a vertical sculpture installed on a granite base and composed of a stack of three layers, that differ from each other by their shape and their materials. The most eccentric part of the piece is the brass grating, handcrafted in the tradition of wrought iron art.
The partition was made to evoke the pavilion’s history as weel as its new architectural plan. A grating formed of perforated stainless steel sheets form the middle part, which in effect decomposes the interior shapes and flattens it like a scanned image, which is animated by the movement of the viewer. The central part, a floating object  oscillates in appearance between an anthropomorphic shape and technological one. At night, the sculpture is illuminated from the inside and projects its strange silhouette on the pavilion’s large windows.
Its title categorizes it into Gilles Mihalcean’s religious-themed sculptures. Its theme partly references the biblical figure Thomas as the patron saint of architects and contributes also to establish a symbolic link between the piece and its surroundings: the Université de Montréal’s Faculté de l’aménagement interior courtyard, which houses the École d’architecture. This reference to Thomas was conceived to relate to the piece’s intriguing allure, which casts doubt on what the viewer truly sees and what this grating-fitted structure really encloses. Therefore, this creates a theatrical effect that brings the spectator to truly feel what Thomas did as he felt Christ’s wound. The dual reference evoked in Mihalcean’s Saint Thomas also suggests the importance of doubt in the context of a responsible architectural practice.